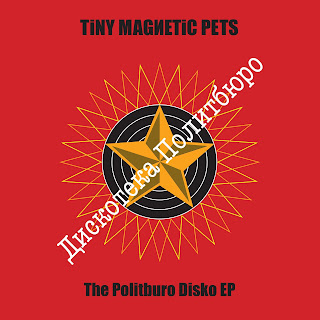 For fans of: Depeche Mode, Goldfrapp, Blondie, The Killers, Chvrches.


From Dublin, TINY MAGNETIC PETS are now bringing their blend of New Wave-infused Germanic Synthpop to all streaming platforms. Like the rest of the world, TMP’s 2020 plans have been placed on lockdown.

Rather appropriately for the current world climate, the song deals with boredom, loss of control and the downsides of social media where by it’s very nature dupes us into thinking that everyone else is having a better life than us. It is however delivered in the typical energetic TMP style: a driving bass & synth groove with Eugene doing his best Clem Burke impersonation on drums - topped off by singer Paula Gilmer’s playful yet confident delivery. Not for nothing has she been compared to Debbie Harry!

Approaching live performance like a rock band, TMP have played no less than seven tours in the last
two years opening for OMD on the UK leg of their sold-out Punishment Of Luxury tour, Midge Ure on his 1980 Vienna/Visage European & UK tours as well as The Killers’ Dave Keuning, plus Krautrock legends: Wolfgang Flür (Kraftwerk) and Michael Rother (NEU/Kraftwerk/Harmonia).

Tiny Magnetic Pets are unusual on the current Irish music scene. Rather than be influenced by singer/
songwriters or indie rock, the inspiration behind their music comes from Bowie’s Berlin period,
70’s krautrock and early disco, with a good measure of 80’ synthpop thrown into the mix. With the
quintessentially pop vocal delivery of Paula Gilmer, it could be said that Tiny Magnetic Pets operated in uncharted musical water, somewhere between Kylie and Kluster.

The band have accrued strong support for their blend of electronic European New Wave. Ex-Visage member and founder of the Blitz club, Rusty Egan, has been an enthusiastic champion with a remix of their track ‘Control Me’. Another fan is Andy McCluskey from OMD who in 2017 recommended the band “for all lovers of distinctive electronic music “ - before inviting them on OMD’s sell-out UK tour. After opening for NEU! legend Michael Rother at the Electri_City festival in Düsseldorf, they played a blistering show which led to them opening for ex-Kraftwerk member Wolfgang Flür. That show was a defining moment for Tiny Magnetic Pets, leading to two collaborations with the technopop legend on their 2nd album “Deluxe/Debris”.